Ocrelizumab (trade name Ocrevus) is a humanized monoclonal antibody (mAb) for the treatment of CD20-expressing tumors. The Fc engineered Ocrelizumab has overlapping epitopes with rituximab, but shows less immunogenicity and increased antibody-dependent cell-mediated cytotoxicity (ADCC) effect. Therefore, ocrelizumab is considered to be more effective and better-tolerated than rituximab. It is now being evaluated in phase III clinical trials in patients with relapsing-remitting multiple sclerosis (RRMS).

Ocrelizumab is a novel Fc-engineered anti-CD20 mAb developed to meet the needs of a new therapiy with higher activity on CD20-positive cancers. Compared to the classical rituximab, Ocrelizumab IgG1 shows increased binding to FcγR, greater ADCC potency, and a maximum cytotoxicity than rituximab replacement with the wild-type Fc domain.

Mechanism of Action of Ocrelizumab

Ocrelizumab is a mAb derived from a parent antibody—rituximab. Ocrelizumab and rituximab bind to the same epitope of CD20 and exhibit similar affinity, tumor orientation, effector cell-independent, anti-tumor cell proliferation activity in breast cancer cells in vitro. Fc-engineered Ocrelizumab is thought to have therapeutic activity against CD20-positive tumors because of:

(A) Binding to CD20 on the surface of B cells to activate complement cascade and produce a membrane attack complex (MAC) that directly induces B cell cleavage by complement-mediated cytotoxicity (CDC).
(B) Interaction with NK cells via Fc receptor III (FcRIII), which results in ADCC effect. 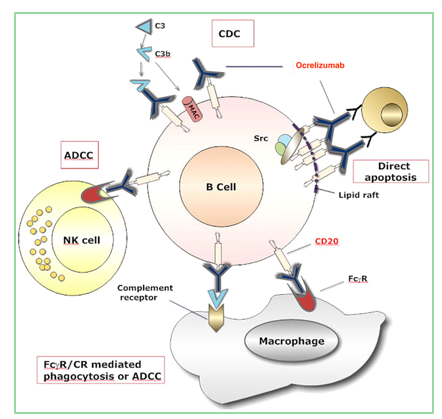 Fig.2 Mechanisms of action of Ocrelizumab. 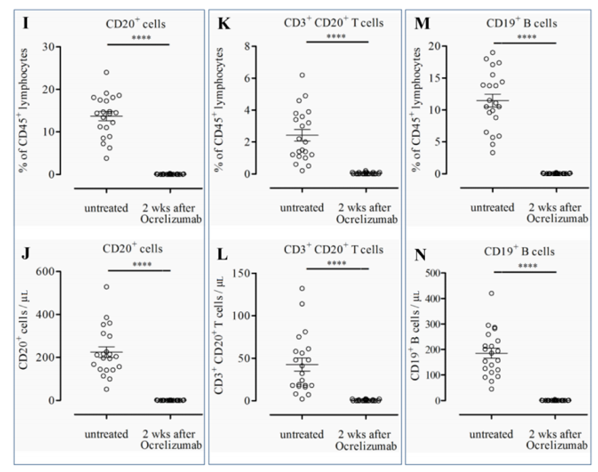 Ocrelizumab efficiently consume peripherally immature and mature B cells. B cell complementation kinetics accelerates when active immunization, and the clinical effect of B cell depletion is depended on the experimental autoimmune encephalomyelitis (EAE) model used. 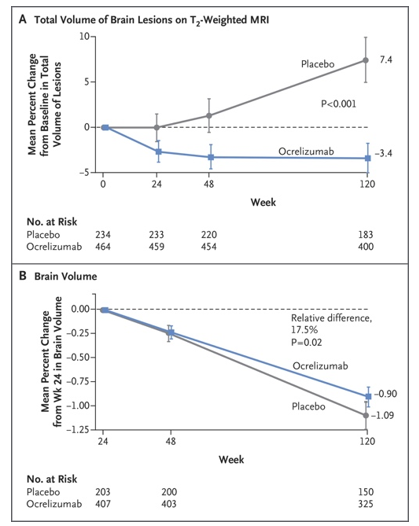