The IgG subclass contains a highly conserved asparagine 297(N)-linked biantennary glycan in its CH2 domain, and its core structure can be extended to terminal galactose and sialic acid residues. The presence of this glycan plays an important role in protein folding and post-translational quality control mechanisms, and is essential for antibody-mediated effector functions. The binding of the complement component C1q to the CH2 domain of antigen-bound immunoglobulin gamma (IgG) activates the classical complement pathway and depends on its close proximity to the Fc fragment of neighboring antibodies. Data indicates that Fc galactosylation can be used to enhance the complement activation properties of IgG1 and IgG3 antibodies. Therefore, modification of monoclonal antibody galactosylation is very important for Fc-dependent effector functions. 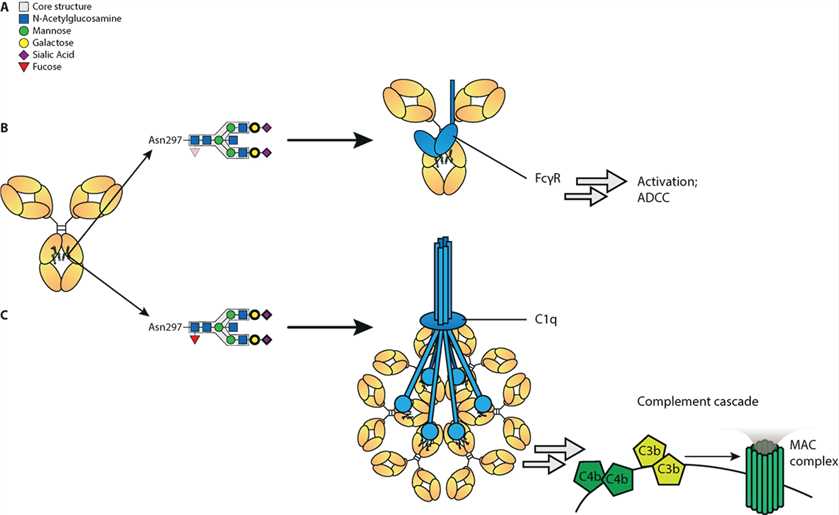 To produce antibodies with enhanced effector functions, Creative Biolabs has developed an advanced GlycoDegree™ platform that allows limiting the degree of galactose of recombinantly expressed therapeutic antibodies. We can produce galactose modified antibodies in a variety of bioengineered mammalian or non-mammalian cell line systems by using in vitro enzyme or chemical enzyme methods. Our antibody glycan analysis system will ensure the quality of our service.

Biological Significance of Galactose on Antibodies

Recombinant mAb and human endogenous IgG Fc region have biantennary complex oligosaccharides with either zero, one, or two terminal galactose moieties, which are the three major glycoforms (G0, G1, or G2). The effect of terminal galactose residues on the biological functions of IgG has been investigated in many studies. Although the content of terminal Gal residues has been shown to play an important role in the CDC activity of IgG, ADCC activity does not appear to be affected by the galactosylation of IgG mAb. A recent in vitro study showed that CDC activity and antibody binding to C1q increased with the increase of Gal content. They confirmed that ADCC activity is not affected by the content of terminal Gal residues. Nevertheless, despite some conflicting results, galactosylation can still have a positive effect on the binding affinity of IgG1 to FcγRIIa and FcγRIIIa receptors and ADCC activity. These findings are applicable to IgG1, but not to other subclasses of mAb. Therefore, a more detailed study of the effect of galactosylation on effector functions of other IgG subclasses (such as ADCC and CDC) is needed. 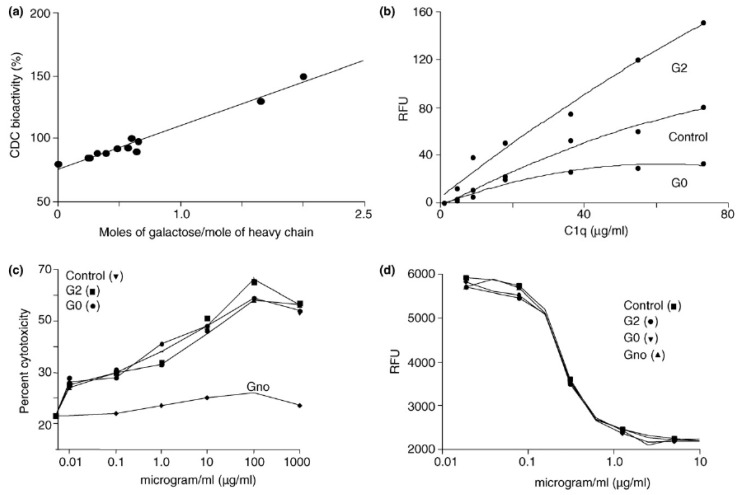 In order to support our mission to achieve the frontier advancement in life sciences, Creative Biolabs has developed many cutting-edge technologies in the field of glycan engineering based on our GlycoDegree™ platform. Our glycosylation antibody production system includes three main mammalian cell lines CHO, NS0 and SP2 / 0), etc. Through modern recombinant technology, a group of specific glycosyltransferase and/or glycosidase genes can be specifically knocked out or adjusted to produce glycoengineered antibodies with more humanization and homogenous glycosylation, better pharmacokinetics and enhanced pharmacological efficacy. Our scientists are fully confident to provide effective and economically feasible antibody glycoengineering solutions.