Antibodies and antibody-based drugs are currently the fastest growing therapies. In the past thirty years, more than 30 therapeutic monoclonal antibodies and their derivatives have been approved, and they have been successfully used in various indications, including cancer, organ transplantation, autoimmune/inflammatory diseases and cardiovascular diseases. The isotype of choice for antibody therapeutics is human IgG, whose Fc region contains the ubiquitous asparagine residue (N297), which serves as the receptor site for N-linked glycans. This glycosylation has a great influence on the activity of IgG. The properties of these glycans can decisively affect the therapeutic performance of recombinant antibodies, and their deletion or Engineering can lead to loss of Fc effector function, greater immunogenicity and unfavorable pharmacokinetic characteristics.

Recent studies have shown that aglycosylation can be genetically engineered for glycosylation antibodies to have novel or enhanced effector functions and retain good pharmacokinetic properties. The currently marketed Roche anti-PD-L1 monoclonal antibody Atezolizumab uses IgG1 (N297A) to remove glycosylation. There is also a series of monoclonal antibodies modified with N297A in clinical trials. Therefore, extensive engineering of non-glycosylated Fc has transformed aglycosylated IgG antibodies into a new class of effector functional human immunotherapeutics.

Multiple mAbs with various modifications in the Fc region are being studied in different phases of clinical trials, plesae refer to Figure 1. These molecules can be roughly divided into three categories: (1) enhanced effector responses can treat cancer and infectious diseases; (2) can inhibit immune activation to treat inflammatory diseases; (3) new aglycosylated monoclonal antibodies, with inert or active immune function. 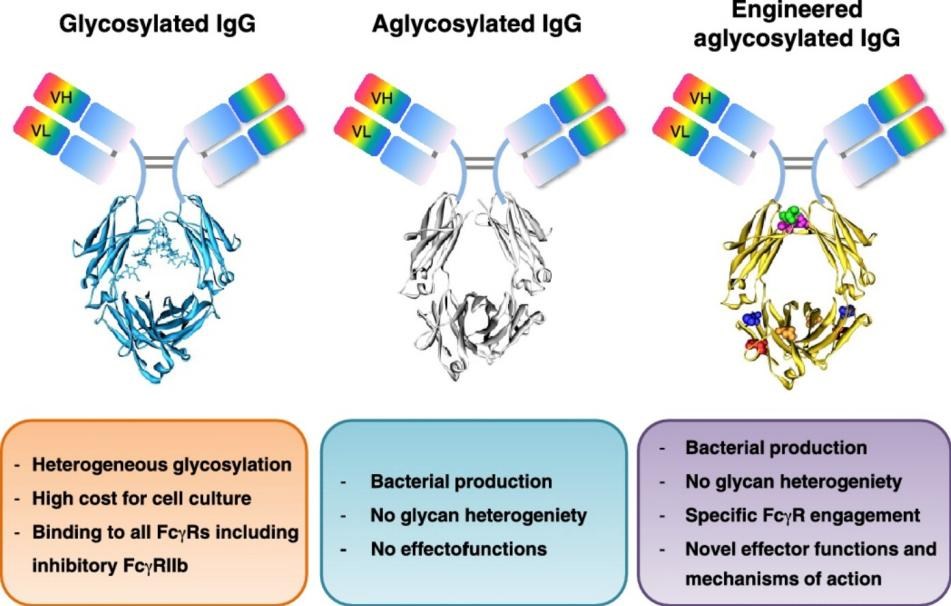 After removing glycosylation, the structure of the CH2 part of the antibody can be made more flexible, and the steric resistance to binding to FcγRs can be reduced to a certain extent, so it can selectively bind to part of FcγRs. Based on this feature, by combining amino acid mutation technology, the binding to FcγRs can be adjusted, so the effector function mediated by the Fc fragment can be balanced. For example, Xencor's XmAb5871 and XmAb7951 both specifically improve the binding ability of antibodies to FcgRII, and show more advantageous clinical value than before modification.

When expressed in a mammalian cell system, the inherent glycan heterogeneity of mAbs can lead to high production costs and changes in mAb function between batches. Recently, great efforts have been invested to develop aglycosylated mAb as an alternative. Ideally, an aglycosylated mAb will be as effective as or even better than its glycosylated equivalent in mediating effector functions for antigen or target cell clearance.

Because mammalian cells have problems such as easy contamination, low expression and long culture period, some researchers will vigorously promote deglycosylated antibodies in order to apply other expression systems (such as prokaryotic, etc.) to antibody drug production platforms. Research. But the author believes that this is basically a dazzling technology. Even if these proteins are produced, there will be many uncertainties in immunogenicity and protein folding. However, expressing aglycosylated antibodies in mammalian cells can indeed effectively improve product uniformity and reduce the pressure of process development and quality control.

Creative Biolabs provides a variety of glycosylation modification technologies to therapeutic antibodies, including fucose deletion, sialylation, fucose removal and sialylated antibody modification. At the same time, we provide customers with customized antibody glycosylation design and services, and assist in the development of novel antibodies and high-end biobetter antibodies.

According to the different needs of customers for antibody characteristics, we provide corresponding glycosylation services, including but not limited to