Protein glycosylation is the addition of monosaccharides or oligosaccharide chains (glycans) to the peptide backbone. It is a common post-translational modification (PTM) and has a variety of biological functions. More than half of all biotherapeutics are glycosylated, including monoclonal antibodies (mAb), Fc fusion proteins, clotting factors and cytokines. N-glycosylation (where the glycan is attached to the nitrogen side chain of asparagine) may be the most widely known form of glycosylation on mAbs in biological therapy, in which the N-glycan structure affects pharmacokinetics , pharmacodynamics and immunogenicity. The effect of glycosylation on antibody function means that glycosylation is a key quality attribute (CQA), which makes the characterization of N-glycan structure an essential part of the development of biotherapeutics.

The complex, branched structure of N-glycans presents unique analytical challenges. There are many methods, and each has its own advantages and limitations. Creative Biolabs uses two methods for glycan analysis: capillary electrophoresis (CE-) and mass spectrometry. If you want to understand the relative quantification of common glycosylation, it is recommended to use a CE-based method. If you want to understand the more common types of glycans, relative quantification and their position at the intact protein level, we recommend mass spectrometry.

N-glycosylation of antibodies and antibody-derived biotherapeutics

The effects of N-glycans on the efficacy, stability, half-life and safety of antibodies and antibody-derived biological therapies have been fully reviewed and summarized in Figure 1. Figure 1A represents some of the therapeutic effects of biantennary N-glycans in the Fc region of IgG. The interaction between the Fc region of IgG and Fc-γ receptor (FcγR) affects immune effect functions by binding to FcγRIIIa, including antibody-dependent cell-mediated cytotoxicity (ADCC), which is the mechanism of action of some therapeutic IgG . The absence of fucose ("core" fucose) linked to the innermost layer of Fc N-glycans, GlcNAc, enhances Fcγ binding RIIIa and ADCC activity. Galactosylation may also enhance the binding of FcγRIIIa through conformational changes and add to the non-glycosylated ADCC effect. Terminal galactose also increases the binding to complement 1q (C1q), resulting in enhanced complement dependent cytotoxicity (CDC). The terminal sialic acid has an anti-inflammatory effect. The presence of sialic acid residues may also reduce ADCC activity and reduce the clearance rate by isolating galactose from the asialoglycoprotein receptor.

Figure 2 illustrates the N-glycan analysis method from intact proteins to glycopeptides, released glycans, and then to individual monosaccharide components. The complete quality of the different glycoforms of glycoproteins can be characterized by high-resolution accurate mass mass spectrometry (HRAM-MS) and reversed-phase liquid chromatography (RP-LC). Although the reduction reaction can be used to analyze the heavy and light chain IgG chains separately, or it can be reduced using specific proteases (such as IdeS), this "top-down" approach requires little sample preparation. LC-ESI-MS has also been used to analyze glycosylation of erythropoietin (EPO), including darbepoetin alfa, an EPO analog with two additional N-linked glycan sites and a longer serum half-life. Capillary electrophoresis (CE)-electrospray ionization (ESI)-mass spectrometry (MS) (CE-ESI-MS) can also be used to analyze the quality of intact glycoforms. In order to determine the occupancy rate of glycosylation sites, glycoproteins and Tryspin or other proteases can be decomposed into glycopeptides and analyzed by LC-MS or CE-MS. 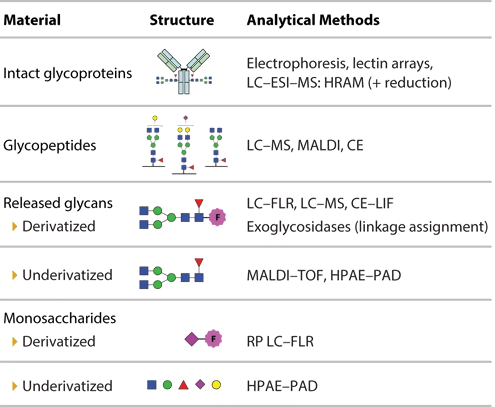 With extensive experience in glycan characterization, our team can work on custom solutions to meet the unique requirements of each product. With flexible global capabilities, you can provide services where you need it most. Contact our expert scientists today to discuss how our range of glycan analytical services can improve your unique process.