Today, monoclonal immunoglobulin (IgG) antibodies have become the main choice for cancer treatment. The efficacy of monoclonal antibodies (mAbs) is achieved through their antigen-binding fragments (Fab) and crystallizable fragments (Fc). Fab can specifically recognize the tumor-associated antigen (TAA), thereby regulating the downstream signaling pathway connected by TAA, which may lead to the inhibition of tumor growth and induce tumor cell apoptosis and differentiation. The Fc region can further improve the efficacy of mAbs by mediating effector functions such as antibody-dependent cell cytotoxicity (ADCC), complement-dependent cytotoxicity (CDC), and antibody-dependent cell phagocytosis (ADCP). In view of the fact that the Fc region plays a vital role in regulating the efficacy of mAbs in cancer treatment, extensive research on Fc engineering has been conducted in recent years.

Creative Biolabs focuses on the recent progress in therapeutic Fc engineering-associated effector functions (ADCC, ADCP, and CDC), and are committed to developing the optimal Fc mutation strategy to support the innovative drugs currently being studied in clinical trials, and fine-tune them to achieve the required treatment effect.

The FcγR composed of FcγRI (CD64), FcγRII (CD32) and FcγRIII (CD16) are heterogeneous in terms of cell expression and Fc binding affinity. FcγRI binds to the Fc region with KD~10-8-8-10-9 M, and is expressed in monocytes, dendritic cells and IFN-γ-activated neutrophils. FcγRII binds to the Fc region with a relatively low affinity (KD~10-7 M) and exists in five isoforms. Among them, the inhibitory factor FcγRIIb, which mainly carries an inhibitory motif based on immunoreceptor tyrosine on B lymphocytes, is essential for immune regulation.

FcγRIIb is the only Fc receptor with inhibitory function. It is usually expressed on the same cells as other activating FcγRs, and plays a negative feedback regulation effect on the signals of FcγRIIa and FcγRIIIa. Therefore, FcγRIIb can be applied to the treatment of autoimmune diseases and allergic diseases. In addition, FcγRIIb is the only Fc receptor expressed on B cells, so antigen-specific B cells can recognize the complex of self-antigen and therapeutic antibody through FcγRIIb, thereby exerting an immunosuppressive effect. Therefore, FcγRIIb can be used as a key checkpoint of humoral immune response and play a role in diseases such as lupus erythematosus (SLE). 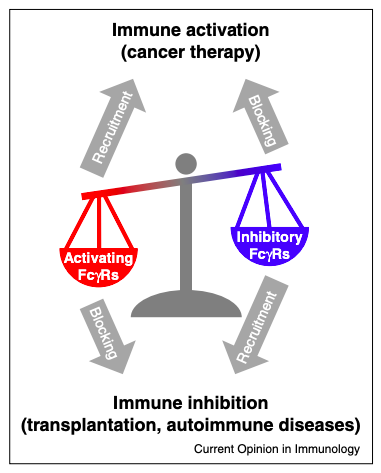 By manipulating the recruitment of activated and inhibitory receptors, such as through engineered antibodies, a treatment plan can be tailored to the optimal treatment for a specific indication.

Studies have found that Fc modifications such as S267E/L328F or P238D can increase the affinity of Fc and FcγRIIb by more than 100 times. XmAb5871 is a humanized antibody. Its Fc region has been modified by S267E/L328F to enhance its affinity for FcγRIIb. It activates FcγRIIb through its anti-CD19Fab region, thereby inhibiting the activation of B cells without causing cytotoxicity to B cells. It is currently in a phase I clinical trial for the treatment of SLE. The anti-CD19 Fab fragment in XmAb5871 is exactly the same as the anti-CD19 Fab in XmAb5574 mentioned above, but the two amino acid differences in the Fc region lead to their different functions. In addition, another anti-IgE antibody XmAb7195 is also modified with S267E/L328F to enhance its affinity for FcγRIIb. It can not only neutralize soluble IgE, but also selectively inhibit the activation of IgE+B cells. XmAb7195 is currently in Phase I clinical treatment of allergic diseases.