Human IgG1 isotype antibodies are usually used therapeutically, which contains two diantenna complex N-linked oligosaccharides in the constant region (Fc). Especially with regard to cancer treatment, it is known that the antibody effector function of antibody-dependent cellular cytotoxicity (ADCC) is very important and is closely related to the clinical efficacy of humans in vivo. ADCC is greatly enhanced by the absence of the core fucose of oligosaccharides attached to the Fc. Unfortunately, all licensed therapeutic antibodies and almost all currently developed therapeutic antibodies are fucosylated and fail to optimize ADCC, which leads to unwanted immunogenic response and weak efficacy. At Creative Biolabs, we explored the possibility of transforming established antibody-producing cells into cells that completely lack core fucosylated antibodies to promote the rapid development of next-generation therapeutic antibodies.

The effect of fucose consumption of IgG-Fc glycans on ADCC may represent one of the most important discoveries in antibody glycobiology. The significant enhancement of ADCC is attributed to the increased affinity of non-fucosylated IgG for FcγRIIIa expressed on natural killer (NK) cells. Although it has been shown that the deletion of core fucose residues in Fc glycans can significantly improve the binding of antibodies to FcRIIIa and ADCC activity, many studies have shown that the level of fucosylation has a slight effect on the binding of antibodies to FcγR1, FcγRII and C1q. It has been reported in previous studies that, compared with fucosylated recombinant IgG, fucosylated anti-HER2 exhibited about 100 times higher ADCC. Studies have confirmed that non-fucosylated IgG1 mediates very high ADCC in humans at low doses, thereby enhancing the therapeutic potential of modified mAbs. Another study showed that the higher binding affinity of fucosylated IgG to FcγRIIIa is applicable to all IgG subclasses. In summary, the fucosylation of mAb has the greatest impact on ADCC enhancement, which mediates the efficacy of potential therapeutic recombinant antibodies. 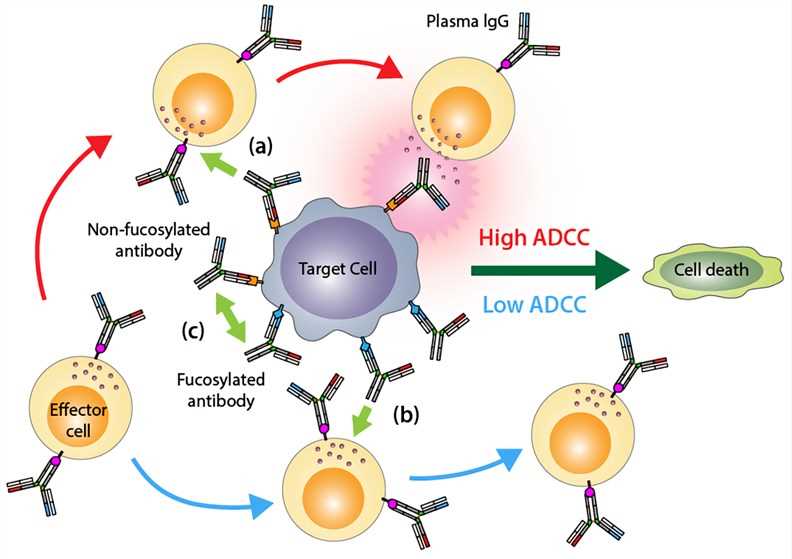 Fig.1 The effect of fucosylated and nonfucosylated therapeutic antibody-induced ADCC.

Applicaitons of Nonfucosylated Antibodies in Clinical

Several non-fucosylated IgG antibodies have entered the clinic. A phase I clinical trial of the non-fucosylated humanized anti-CC chemokine receptor 4 (CCR4) IgG1 antibody KW-0761 (mogamulizumab) in 2006 in relapsed adult T-cell leukemia or peripheral T-cell lymphoma Start in the patient. Phase II clinical trials showed that Mogamulizumab monotherapy has strong anti-tumor activity and tolerable toxicity, so it was approved by the Japanese regulatory agency in 2012. Several other non-fucosylated IgG antibodies are being clinically evaluated, including those directed against OX40 (KHK4083), IL-5R (benacizumab), EGFR (imgatuzumab) and CD20 (obinutuzumab). It has been proven that the consumption of fucose by existing anti-tumor therapeutic IgG antibodies (such as rituximab and trastuzumab) can enhance ADCC activity in vitro. The anti-CD20 humanized IgG1 antibody obinutuzumab produced in CHO-K1 cells engineered to overexpress GnT-III and Golgiβ-mannosidase II has a low fucose content in Fc glycans and is resistant to rituximab The monoclonal antibody has superior anti-tumor activity. Obinutuzumab was approved in the United States in 2013 for the treatment of follicular lymphoma. Therefore, non-fucosylated IgG antibodies will be further developed into next-generation therapeutic antibodies with reduced doses of effective ADCC. 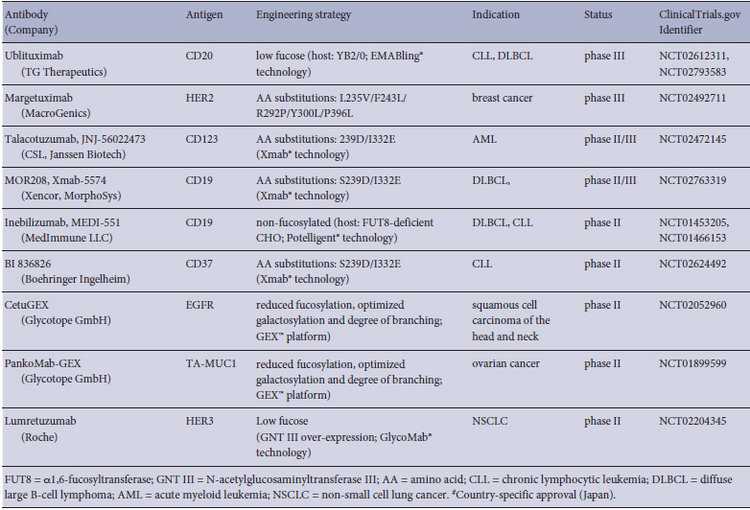 In order to support our mission to achieve the frontier advancement in life sciences, Creative Biolabs has developed many cutting-edge technologies in the field of glycan engineering based on our GlycoDegree™ platform. Through modern recombinant technology, a group of specific glycosyltransferase and/or glycosidase genes can be specifically knocked out or adjusted to produce glycoengineered antibodies with more humanization and homogenous glycosylation, better pharmacokinetics and enhanced pharmacological efficacy. Our scientists are fully confident to provide effective and economically feasible antibody glycoengineering solutions.