The development of recombinant therapeutic-based monoclonal antibodies (mAbs) has become a major revolution in modern medicine. Most mAbs are usually immunoglobulin G (IgG) subclasses, and they are glycosylated at position 297 (Asn-297) of the conserved asparagine in the CH2 domain of the Fc region. Oligosaccharides play an important role in Fc effector functions, including antibody-dependent cytotoxicity (ADCC) and complement-dependent cytotoxicity (CDC), which is the main mechanism of action of therapeutic antibodies located in the Fc region. In the last decade, it has been found that these interactions are highly dependent on the presence and structure of N-glycans linked to Fc fragments, which will affect the binding affinity to Fcγ receptors. In addition, mAbs produced in non-human cells express oligosaccharides that are not normally found in serum IgG, which may cause immunogenicity problems when administered to patients. Therefore, engineering Fc glycosylation to develop therapeutic monoclonal antibodies with desired characteristics is a promising strategy to enhance the function and efficacy of therapeutic IgG antibodies.

In order to optimize the therapeutic use of mAbs, Creative Biolabs has developed mutilple glycoengineering strategies for reducing mAb glycan heterogeneity, improving its safety and therapeutic efficacy of these important agents. We have a professional team of experts who have a deep understanding of terminal sugar residues (such as mannose, sialic acid, fucose or galactose), which can have positive or negative effects on the therapeutic monoclonal antibody influences. We are pleased to discuss our knowledge about current Fc glycoengineering strategies and propose solutions to meet your requirements.

Structurally, the N-linked glycan of human IgG is usually a dual antenna complex. Different residues (such as fucose, bisected GlcNAc, galactose, and sialic acid) can be added to the core biantennary complex structure (GlcNAc2Man3GlcNAc2) to produce the normal polyclonal IgG IgG-Fc glycan (Figure 1). According to the number of galactose residues in the outer arm of biantennary glycans, heterogeneous glycans can be divided into three groups (G0, G1 and G2). In each of these groups, with or without core fucose and bisected GlcNAc produced different species (Figure 2). 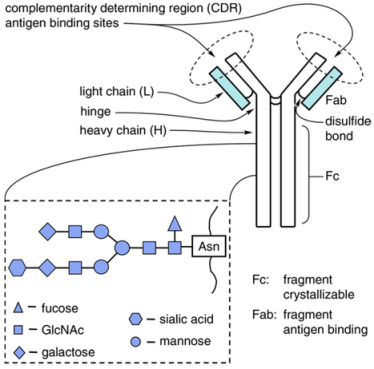 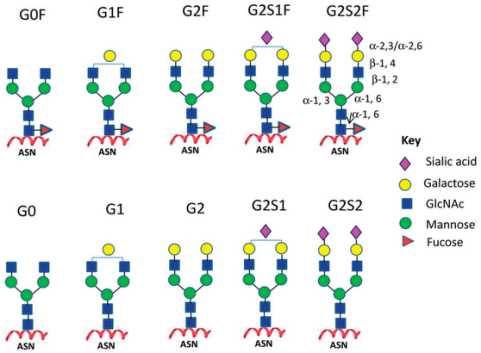 It is recognized that glycan structure can directly affect IgG by changing the conformation of the Fc domain. N-glycans have basic structural support functions. They play a key role in the stability of the IgG CH2 domain, which binds to glycans through extensive non-covalent interactions, thereby reducing CH2 kinetics and helping CH2 folding. Deglycosylation reduces the thermal stability of the mAb, making it easier to unfold and degrade. In addition, the removal of glycan residues leads to the production of a "closed" conformation, while the fully galactosylated IgG-Fc is associated with an "open" conformation, which may be most beneficial for FcγR binding. Therefore, the presence or absence of sugar residues on Fc glycans affects the conformation of Fc, thereby affecting Fc-mediated effector functions. Table 1 summarizes these effects.

Table.1 Impact of the presence of extra-core monosaccharides on IgG ADCC and CDC effector functions.

Please send us your project description and requirements, and you will get tailored all-in-one services to meet your R&D or cGMP production needs.